This article is about a marine lake in the Togean Islands of Indonesia, full of jellyfish that do not sting people. Here I muse about the how the lake formed, about its distinctive ecology, and how it fits into a narrative of  ecosystem collapse without necessarily indicating collapse. Wildlands Studies, an academic partner of Western Washington University, enabled our team to visit Sulawesi in February 2018. Betchart Expeditions got me there in 2013 and 2016. To both of these organizations. I feel gratitude. 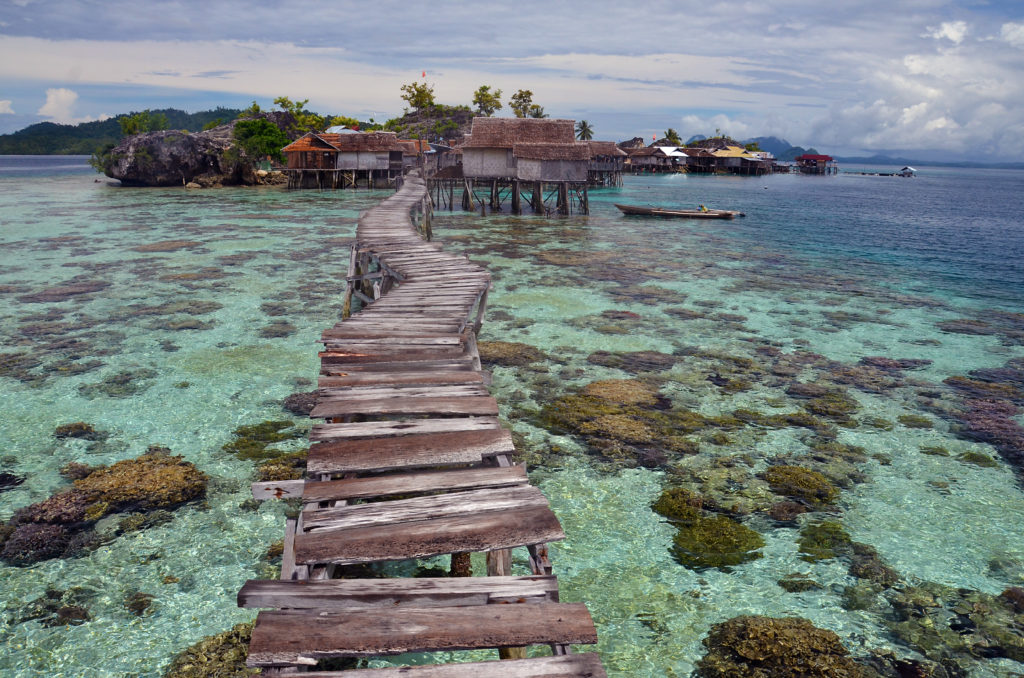 Equatorial magic along the arc of the Togean Islands, Pulau Papan in 2013. The plank walk has since been upgraded.

When the horizon is clear, the view from the Togean Islands includes two distant mountain ranges on opposite sides of Tomini Bay, one range to the north of the Equator, one to the south. Both belong to the Indonesian island of Sulawesi. Tomini Bay is about the size of Lake Superior, so the mountains are not near at hand, but they are very high and the air is clear in this sparsely populated, maritime realm. The waters of Tomini Bay are as deep as the mountains are tall and the bay itself is nearly encircled by Sulawesi’s long  peninsular arms.

Like much of the Indonesian Archipelago, the ocean basins around Sulawesi are tectonically active. Una Una, the volcano in Tomini Bay, erupted hard in 1983, and its ragged, truncated profile suggests that it might have blown sky-high in prehistoric times. Such explosive tectonics follow  great rumblings of magma deep in the crust of the earth, which can cause the sea floor to rise or subside.

Evidently, in Quaternary times (less than two million years ago) the Togean Islands’ northern margin rose from the sea as a shelf of coral-derived limestone that dissolved slowly in the mildly acidic tropical rainwater. Much later, perhaps only tens of thousands of years ago, the sea reclaimed some of this upthrust coral, either  because the formation subsided again, or simply because sea levels have risen over that time. It is not evident from a boat, but in an aerial perspective, the Togean shoreline looks like the flooded watershed of a reservoir, artificially dammed.

The case in point that matters here: a few meters inland, adjacent to a sandy cove called Karina, there is a flooded doline, or sinkhole. This concavity formed by chemical erosion when the limestone  was higher than it is now. Since then, the sea has reclaimed the doline to form a marine lake, nearly a square kilometer in size, that appears completely isolated from the ocean, but which must be linked by one or more submarine channels big enough to admit small schools of rabbitfish and other denizens of the coral reefs outside. 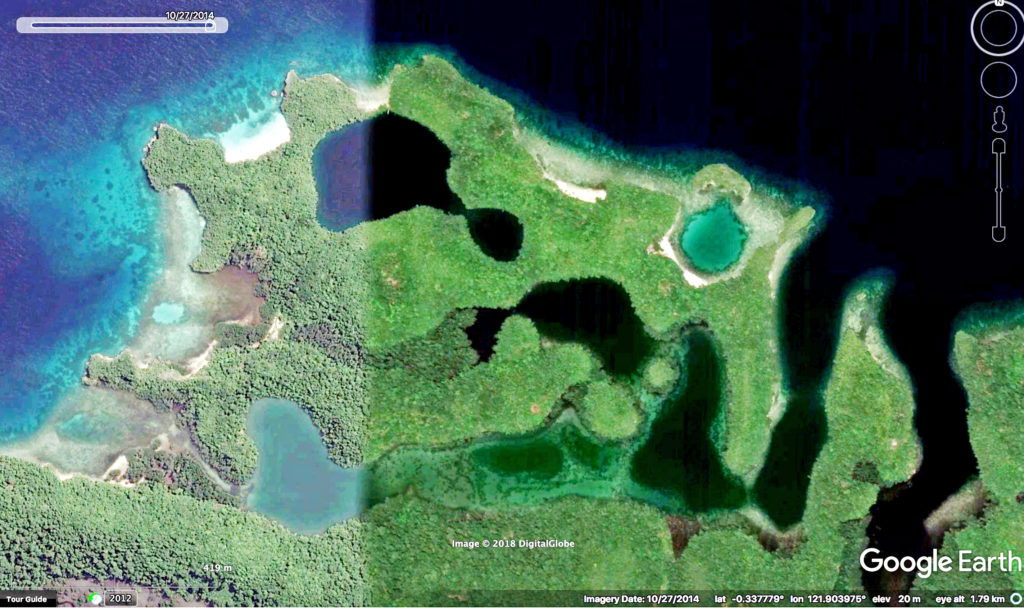 The hourglass shaped lake at the top of this image, a sunken doline, must have submarine  connections to the sea big enough for rabbitfish to swim through. The lake is much warmer than the ocean. It holds two species of jellyfish and lots of sponges and holothurians you won’t see on the adjacent coral reefs.

Water temperatures in the lake fall just shy of hot, perhaps in the mid-30° range Celsius. Near the forest-shaded margin, lake waters are clear, but they tinge green with phytoplankton out towards the middle where it is sunnier. The jellyfish appear a few meters offshore and become more abundant further towards the middle of the lake. After swimming a few meters, I see the colorless disk of a moon jelly (genus Aurelia) a couple of meters below. Higher in the water column and much more abundant are white-spotted jellies (Phyllorhiza punctata). Neither species is rare, and it is not the case that this lake has evolved a stingless kind: both species hold venom, but neither can deploy with enough force to penetrate any but the most delicate of human tissues. This makes evolutionary sense: potent, predatory venom-harpoons would be a needless burden for filter feeding plankton-eaters. 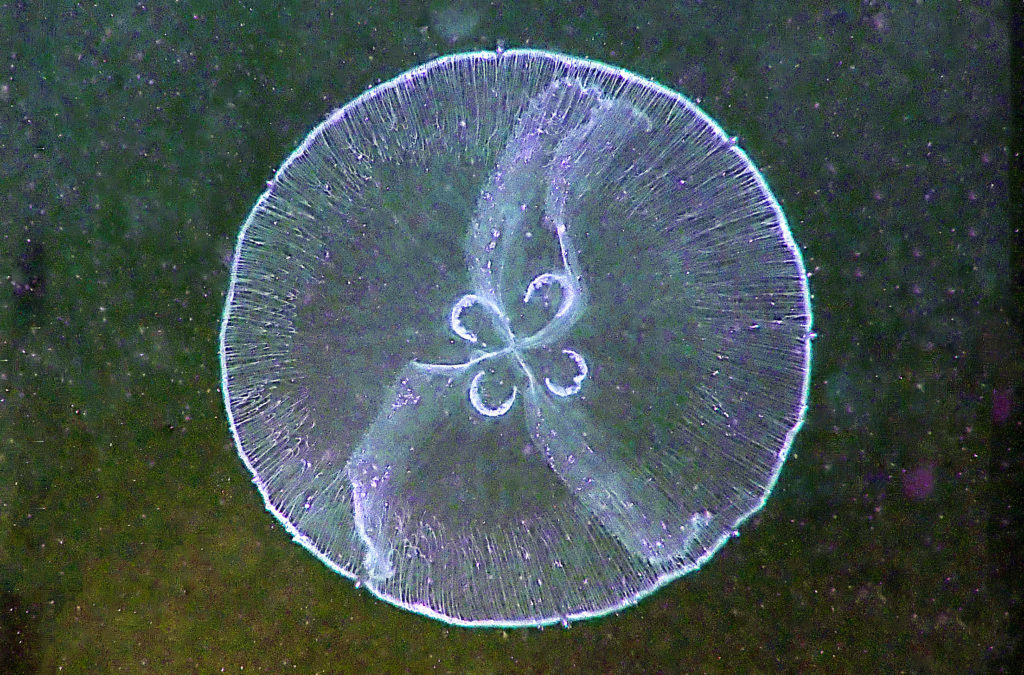 Aurelia, the Moon Jelly, is one of two (almost) stingless species of jellyfish in the marine lake on Togean Island.

The jellies pulsate rhythmically all the time, moving themselves along in the aboral (bell-facing) direction, although the particular trajectory does not seem to matter to the animal. Bell size governs tempo. Big ones, the size of a human heart, beat like the heart of an athlete, the little ones flutter adorably. These animals are reputed to move towards sunlight, to aggregate in groups. But today, from our perspective, swimming amongst them un-finned, they seem innocent of any tendency to orient themselves.

Aurelia, the Moon Jelly, is distinguished by four horseshoe-shaped gonads. It is a lethargic plankton-eater that drifts more than it swims and occurs not just in the Tropics, but in oceans worldwide, waters warm and cold. Perhaps because it is inactive, Aurelia can can pulse and feed normally in waters that are oxygen depleted, giving it a big advantage over filter-feeding fishes in places where high nutrient levels enable bacteria to steal the oxygen.

Phyllorhiza punctata, the White-spotted Jelly, is another filter feeder, but it is primarily herbivorous. Since its phytoplankton staple is less energy rich, it filters feeds capaciously. One individual is said to be able to process about five cubic meters of water a day.

Jellies have an uncommon degree of tolerance for the high temperatures and low pH values that anthropogenic carbon dioxide emissions are inflicting on our oceans. So they are sometimes portrayed as fitting heirs to an ecology of trophic collapse, where the absence of predators unravels and simplifies the food web.

To me, this floating in a boundless bath of jellyfishes, each pulsating to its own tempo, is hallucinatory, some psychedelic archetype. Maybe that’s a cultural legacy of my own upbringing. But my students, upstanding Twenty-First Century United Statesians, with a cultural orientation way different than mine… they dig it too.

After a time, I make my way over to the edge of the doline, where mangroves and forest trees hang over the water and trail their roots into it. Below waterline, the calcareous walls hold a fauna different from anything I’ve seen before. The taxa are familiar enough — sponges, holothurians, tunicates, mussels — but the forms and the abundances are unlike any other place I’ve been. Mussels and a tangle of cordlike, orange and pale-blue sponges are the substrate, which is twined through by a profusion of the sponge-loving synaptid sea cucumbers. Out on the reef, we see lots of noodle-sized synaptids, hunkered against barrel sponges. But these lake dwellers are thick as weenies and wend themselves gelatinously amongst and through the siphons of the sponges, nourishing themselves perhaps on such sugars as sponges are said to produce in excess. If the lake is a psychedelic archetype, this lurid milieu of dark bivalves and worms penetrating the orifices of sponges is a horror archetype, and I’m enthralled.

Coral is conspicuously absent in the warm waters of Jellyfish Doline. This conforms well to our understanding that corals can’t take heat, and are vulnerable to global warming, but it could also be that the waters here do not circulate enough and do not contain enough zooplankton prey to sustain a coral. To the teacher in me, this hypnotically beautiful flooded doline is the ideal proxy for a version of ecosystem forcing and trophic collapse currently in fashion at the dawn of the Anthropocene. Corals, the constructive architects, are gone. In their place, amorphous, pliable sponges coat the walls, flaccid holothurians scouring them inside and out. Together with the jellies, we swim in a warm bath of phytoplankton upon which only the jellies feed. The lack of tiny plankton predators evokes the specter of trophic collapse. The jellies don’t threaten us as we swim amongst them; they need no defense in this realm. In the same spirit, we see on the walls of the doline luxuriant growths of macro-algae; the algae-eating sea urchins and parrotfish are absent. 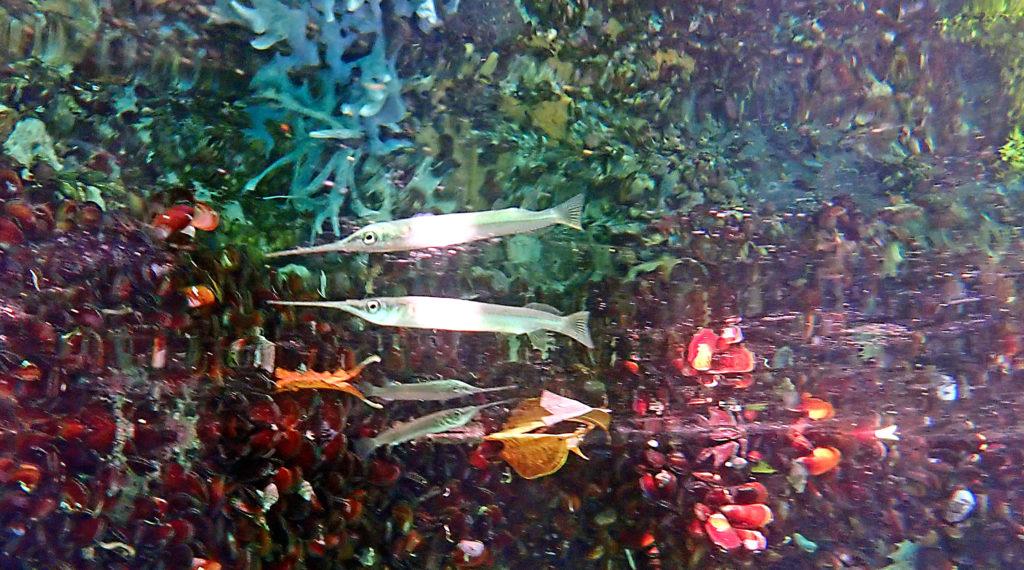 Fish are nowhere abundant in Jellyfish Doline, and seem to prefer the clearer margins of the lake. Most apparent are gobies, Strongylura needlefish (pictured here, reflected on the surface) and herbivorous rabbitfishes. 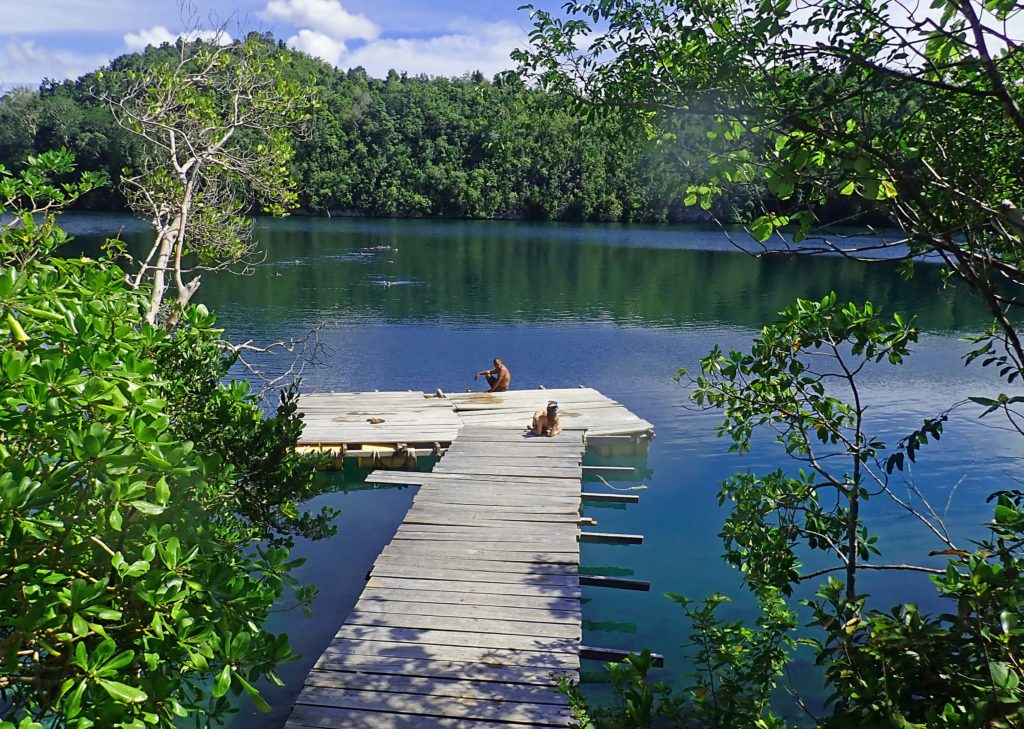 Jellyfish Doline appears to be a limestone sinkhole that subsided and filled with water from the ocean nearby. The lake is full of jellyfish that filter feed on microscopic algae and seem to lack predators.The collapse narrative is convenient, but maybe here it’s just a metaphor.  Can I conclude it like this? The ecosystem of Jellyfish Doline would be a sad substitute for the wild profusion* of species on the coral reefs outside, but as an exception to the norm, it’s entrancing.