Every February Wildlands Studies visits Adang Island in Tarutao National Park, Thailand to learn about marine ecology. Our students collect information about the fringing coral reefs around the island. In addition to whatever is happening on the coral reefs, we have seen (and measured) a significant reconfiguration in the shape of the beach where we stay. This post is about that change. 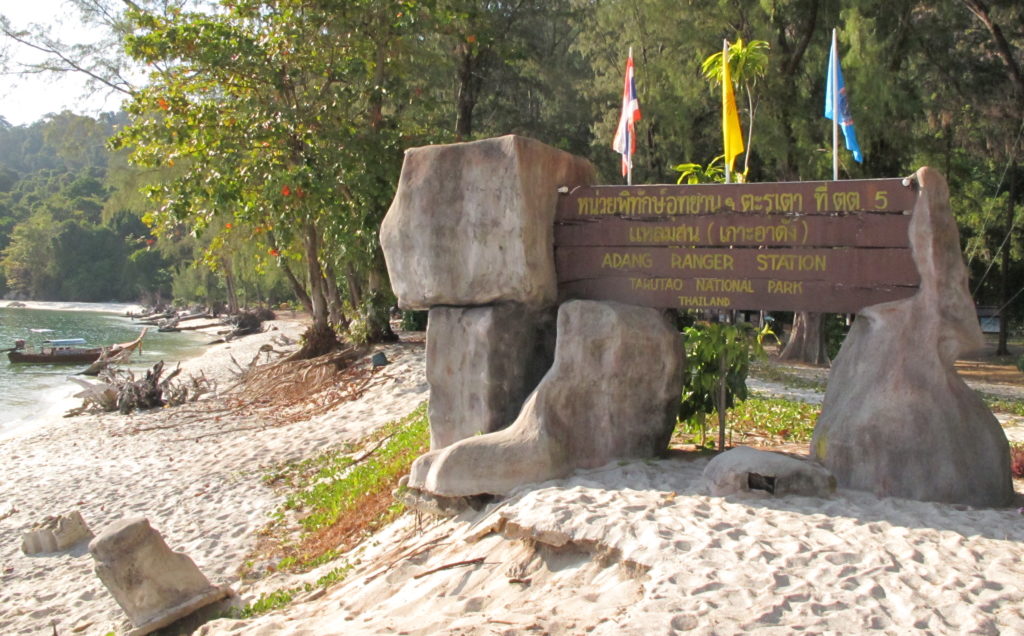 Adang Island is barely inhabited because it has little flat ground. A few families live on the eastern shore, there are bagats, or seasonal settlements, along the western shore, and a national park substation at Laem Son has camping and modest accommodations for a few visitors. Laem Son, where we camp, is a forested beach where ocean currents, rounding the island have deposited sandat the base of Chado Cliff. Laem Son is an inviting place, shaded by Casuarina trees that sway with the seasonal winds, though when the winds blow hard the Causarina may fall, causing commotion in the camping area and sometimes damaging national park structures.

Casuarina are salt tolerant. When a new strand of sandy beach is established by shifting currents — common enough around Laem Son — Casuarina seedlings take hold at top fringe of the intertidal zone. If the strand persists, the Casuarina will grow tall in just a few years. Their dusty green needles extrude salt on winter mornings.

Starting about twenty years ago, something changed in the play of the wind and ocean currents, and Laem Son was reconfigured. Before the turn of the century, sand had extended southwards in a large expanse covered by mature Casuarina. Between 1997 and 2001, most of this sand was dislodged by strong wind-driven currents that came in from the southwest during the summer monsoon season and stripped it away. Some of that sand was redeposited to the southeast, but much seems to have settled into the channel, so the amount of land above sea level is less than before. Many hectares of old beach, shaded under mature Casuarina trees, was swept away, along with a pier, a restaurant and a visitor center. This process continues to date. Every year the ocean cuts back toward granite cliffs on the western part of Laem Son, undercutting and toppling large Casuarina trees into the sea. The beach is growing out eastward, but it seems the amount of dry sand removed exceeds the amount deposited.

Casuarina seedlings that started growing on new beach 15-16 years ago are now more than 30 meters (100 feet).  The fringing coral reef (dominated by massive Porites corals) is far enough from shore so that most of the beach movement occurred within its perimeter and many of the ancient coral heads survived. Out at the tip of Laem Son, there is a seasonal spit of sand. We always see it in February, hooking clockwise. But the fishermen from Lipe Island and the park officials say that it disappears completely under the summer monsson, then forms again when the wind and surface currents shift back to northeast under the winter regime. Satellite imagery confirms what they say is true.

Every year, we make the sweaty climb a couple of hundred meters up to the top of Chado cliff to photograph Laem Son, with Lipe Island in the distance. The view is best from Viewpoint #3 at the top of the granite spur, but it is always tempting to halt at partway up at Viewpoint #1. Here is a photo sequence that shows a quarter century of change in the configuration of Laem Son from 1993-2017. All of these pictures were taken in January – February.

We suppose that the position of the beach is controlled by the relative power of the summer and winter monsoon, expressed by the strength of the wind-driven surface currents that come from the southwest in summer and the northeast in winter. Anecdotally, the winter northeast monsoon was strong in the 1990s. I remember 1993-1996 in particular as a time when inter-island boats would creak as they rode into swells of chop that might be three meters tall. There were days when our group was confined to Laem Son because it was too windy for a longtail boat to cross the channel between Adang and Lipe, the next island over. That was a time a big tree, rooted in sand, fell and destroyed part of the dining area, fortunately after eating hours.

Since the turn of the Century, perhaps winds have been relatively stronger from the southwest. Now there a solid bluff of beachhead running northward along the east side of Laem Son. To the west, ocean has stripped sand from bare rock clear  to the edge of the forest. What was once a sandy stroll to the old Customs House is now an arduous rock hop.

Here’s an animation that shows in map view how the beach has moved through the years, as measured by Wildlands Studies team members who walk the beach with a GPS.