When the sun is about to rise over a ridge that’s pretty high and there are diffuse clouds a little higher and closer than the ridge, and if it all comes together just so, the sun will cast a silhouette of the ridge line against the clouds. Sometimes the silhouetted peaks lie behind the first ridge, in which case the sun is projecting an image of something that would be invisible otherwise.

It’s not a particularly rare phenomenon, but you need to pay attention or you might miss it. Here are a few Himalayan examples from my photo archive. I suppose mountain ranges in other parts of the world might show this phenomenon too. Does anyone have any examples? 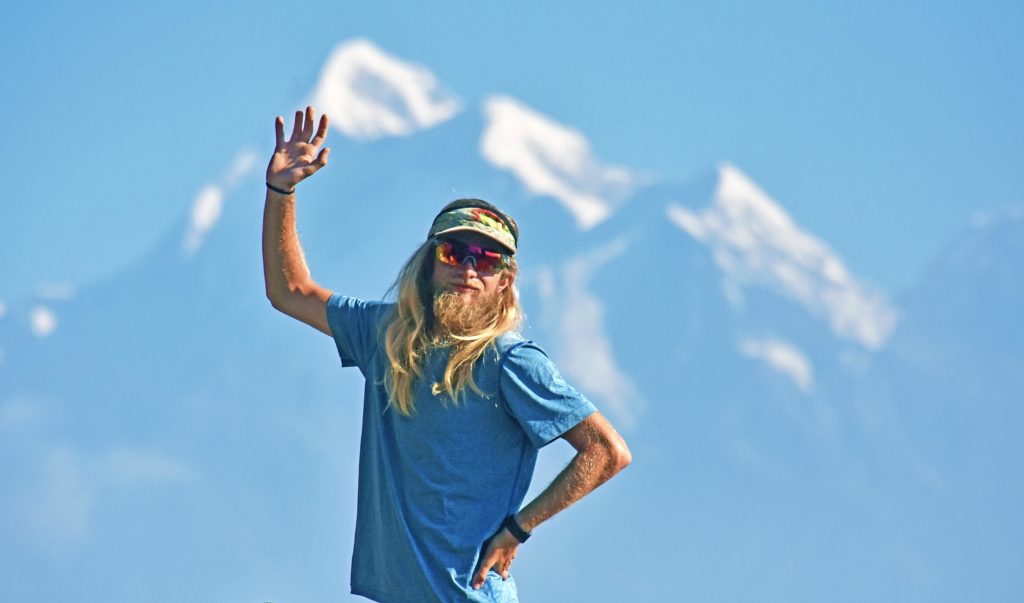 Jehren Boehm was my student on the Wildlands Studies program in Kumaon, India, fall 2011. Then he grew his hair and became our teaching assistant in 2015. Jehren is a talented photographer, videographer and dendrochronologist whose lifestyle enables him to put his skills to good use. He also skis a little.

Jehren compiled this short movie after we finished our program in Kumaon.  I find the star field streaming through the Panchachuli moonset especially compelling.

This image pair comes from Sattal Basin in  the Kumaon region of Uttarakhand, India. It shows a stand of chir pine at the end of the dry season in early May and again 4.5 months later at the end of the 2016 monsoon. Both images were taken by our Wildlands Studies team.

Witness if you will the effect of four months monsoon rainfall on fertile ash. The fires in May were way worse than average, they were really bad. Visibility was only a few hundred meters, and the particulates in the air stung our eyes and burned our throats. My students had to forego their solar panels — not enough photons were made it down. Come fall, visibility was unlimited, slopes were green, the season’s last leeches were still writhing in the wet grass.

Kumaoni wildfires usually start in the chir pine forests. Fire season runs from late winter (after the weather has been dry for several months) and intensifies through spring as temperatures rise and dry things even more. Chir pine (Pinus roxburghii) is a semi-deciduous species. It drops a lot of needles, which decreases shade in the understory and makes the leaf litter even more combustable. Only when a pine-fire is well established can it move into the less combustable stands of oak, rhododendron and other broad-leaved evergreen tree species.

Fires consume the understory vegetation: grasses, shrubs and tree seedlings, but they don’t heat more than a few centimeters below the surface, so grass seeds (or roots if it’s a perennial species), and all the fungi and small arthropods necessary for healthy soil tend to survive. And fires seldom kill mature trees. Pines are scorched, and may be be charred to the core, but usually pull through. Oaks and arboreal rhododendrons can be completely defoliated by a fire, then sprout fresh leaves at the end of the rainy season.

These wildfires are almost always started by humans. Some may be set with a view to opening the understory, to creating proper conditions for a mushroom harvest, or to mobilizing nutrients for a flush of nutritious grass after the rains start. All these explanations apply to one part or another of the monsoonal Himalayan foothills. Recently, Kumaoni media also reports that fires are set by a ‘timber mafia’ in order to produce standing dead trees that can be salvaged for a profit. Cutting a live tree is likely to violate the local forestry laws.

Whatever the cause, this spring fire cycle favors the savanna-like forests where thin-canopied pines allow plenty of sun to hit the ground, drying the grass for the hot season, assuring that the forest will be fire-prone again the following year. Forests with thicker canopies have a shadier understory, with wetter, better-developed soils and don’t sustain a wildfire unless conditions have been atypically dry.

In this way, wildfire dynamics in Kumaon are opposite the North American west. In Kumaon, a part of monsoon Asia, rainfall and warm temperature coincide during June-September, synchronizing the two environmental requirements for soil bacteria and fungi to efficiently decompose soil organic material. Fuel that might accumulate in less bacteria-friendly habitats converts to humus which increases the water-holding capacity of the soil. A sequence of fire-free years enables the forest canopy to fill-in, shading the ground, making it wetter and reducing understory vegetation. Fire suppression in Kumaon drives ecological succession to a less fire-prone habitat type.

In mountains of the American West, say the Sierra Nevada or Rocky Mountains, warm dry summers alternate with cold, wet winters so that the two things bacteria and other small organisms need to attack combustable biomass are offset in time. Disadvantaged bacteria spells fuel loading. Each year with no fire increases the likelihood of a catastrophic fire the next year.

This top graphic illustrates the monsoon climate in Almora, a Kumaoni hill town. During June to September, average temperature (°C in red) and monthly precipitation (cm in blue) are both high. This is the time when fuel that might otherwise accumulate is consumed by warm, moist bacteria and fungi.

This next graphic, an example from Yosemite Valley, California, shows the offset between high temperature (May-September) and high rainfall (November to March). Fuel loading occurs because the two things that bacteria need together to consume biomass efficiently are seasonally offset.

To elaborate just a little more, Yang Wang et al. (2000) describe carbon cycling and decomposition of soil organic material (SOM) at different elevations in the montane mediterranean climate of the Sierra Nevada, California. They find that soil biomass decomposes at a rate that is controlled by temperature and moisture. If soil moisture is favorable, decomposition rates double with a 10° C increase in soil temperature up to temperatures of about 40° C. Favorable moisture means 60-80% of saturation, roughly 20% water by weight. Too much water floods soils, reducing oxygen decomposition.

In the Sierra Nevada, soil moisture explained 55% of variation in CO2 flux. The field observation of Wang’s team shows that hot dry summers limit the rate at which soil biomass can decompose.

Here are a few images from our fall program in Kumaon.  Wildlands + Wildrift: बस कमाल 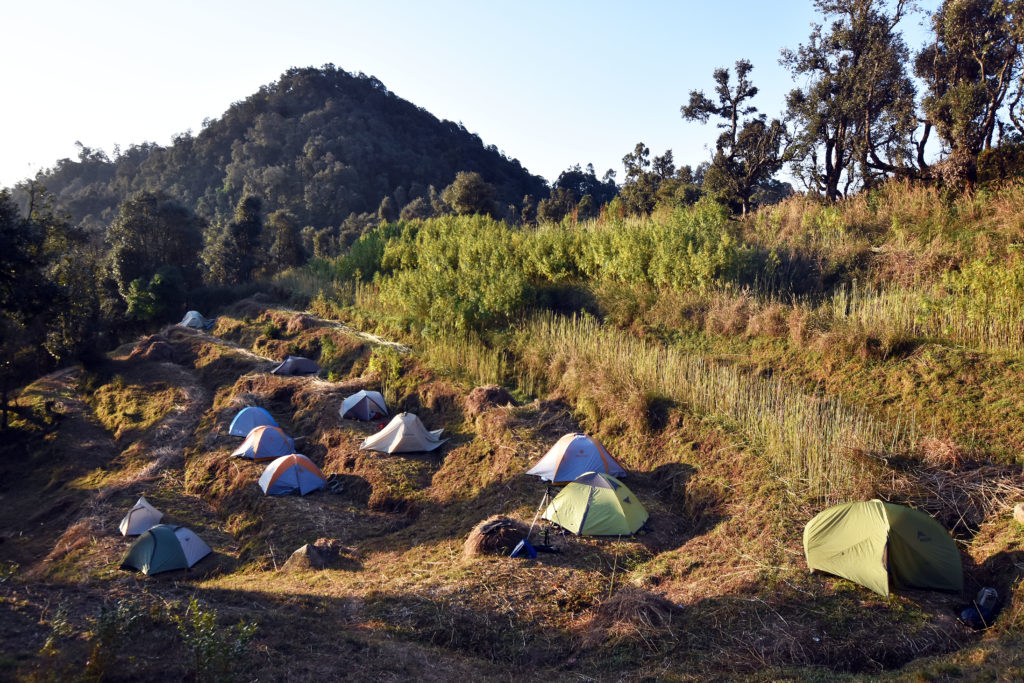 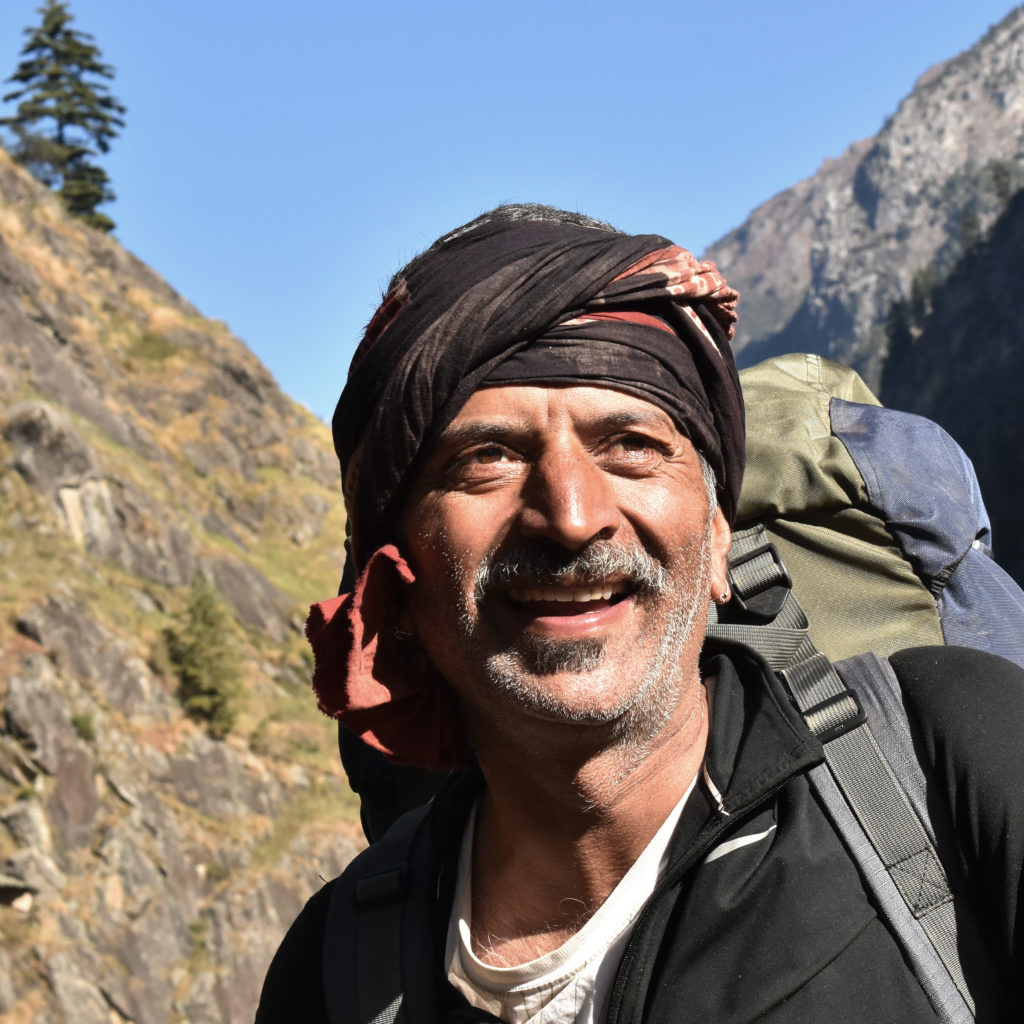 In the Kumaon region of Uttarakhand, a broad reach of hills divides the plains of northern India from the arc of the High Himalaya. Here, for a hundred kilometers or more,  the landscape undulates at pleasant elevations of one to three thousand meters. Towns and villages claim  favorable spots on a tapestry of hill slopes and winding river valleys. The Kumaon Hills are not steep by Himalayan standards, but their contours are intricate. The road network is well-established and actively metastasizing, the roads narrow, sinuous, best negotiated by jeep.

Wildlands Studies, my employer, comes to Kumaon every fall, part of a program of academic field courses accredited by Western Washington University in the United States. This year Wildlands walked away from the slopes of the high mountains, traversing hills that extend southwards from Gwaldam to Ranikhet. Our guides, Kesar and Dinesh, working with our Indian partner, Wildrift Adventures, had scouted this route during the rainy season. And they did a masterful job, finding us interesting paths, well away from the jeep tracks, with sumptuous campsites in all the right places.

Mostly, the Kumaon Hills are forested. Some north-facing slopes and protected areas support banj oak (Quercus leucotrichophora) and arboreal rhododendron, and there are magnificent, calming stands of deodar cedar like the one at Juphal Chora (below).

Most prevalent by far, however, are forests of chir pine (Pinus roxburghii), a native conifer that was promoted in British times as a source of turpentine. Locals don’t like the pines as much as the oak forests they have replaced because oak leaves feed livestock and oak timber is better for fuel and construction. At the ecosystem scale, soils under an oak canopy hold more water, ameliorating both flood  and drought. To add insult to injury, cattle slip and fall easily when intermediate slopes are blanketed in dry pine needles, and no one likes to see tumbling cattle.

None of these complaints dull the beauty and sentimental allure we North Americans see in the pine-savannas of the Kumaon Hills in October, mile on mile of straight, resinous trunks rising through a clean carpet of seasonal grass. This country is no wilderness: nearly every pine has been scored for resin extraction, and their ubiquitous burn scars were inflicted by wildfires of the anthropogenic kind. Yet the ground is mostly litter free, and the seasonal grasses are neither grazed nor have they been cut for winter feed, signaling a paucity of livestock and a low human population density. One night we camped on military land — our guides talked us in — and marveled that a landscape so deserted, yet agreeable, could persist in the world’s second most populous country.

Valley bottoms in this part of Kumaon are cultivated with paddy rice in summer, wheat through the winter and spring. Walking through in late October, we see villagers ploughing terraced fields with oxen and piling dung on the fields. I’m pleased (and a little surprised) at all the paddy rice terraces in this area because this crop has vanished through much of Kumaon where it serves the interests of the local people to buy rice from the plains and to invest their time in more rewarding pursuits.

As in other parts of Kumaon, Cannabis is an important crop. Terraced fields of dank herb were under harvest at the time of our visit. In the morning, villagers strip the stalk and carry bud-laden stems in a woven basket to a flat place in the sun. Here they settle in for an afternoon of rubbing. Resin and pollen transfers from plant to skin, then is rolled into a tarry ball of charas. Bright sun is needed to bring the resin to the right consistency. Here in their native habitat, the Cannabis plants grow straight and tall, their stalks stout enough to serve as a walking stick, should the need arise.

Shrines and temples to Lord Shiva and other Hindu deities stand near the villages and hilltops. The temple complex at Pinath overlooks a spring that marks the source of the Kosi River; the hilltop temple at Airadeo gives a wide angle view of the Himalayan Arc, from Api in Nepal to Himachal Pradesh.

Our walk lasted nine days, with layovers at Pinath and Airadeo. Two of walking days  were lengthy by my modest standards, but fit into the daylight hours. We finished in Dankuri village in time to celebrate the festival of Deepawali, complementing our reverence for all the good things with reckless fireworks and ‘extra-strong’ Kingfisher beer. Our Dankuri residence, leased by Wildrift Adventures, had been freshly painted and scrupulously cleaned for the festival. Come evening, it was brightly lit with colorful bulbs, small oil lamps and a couple of disco balls for the attention of Laxmi, Hindu Goddess of Wealth, who makes her round on this night, the post-harvest New Moon.

Exploring with my students, I sometimes call into question the alpine chauvinism so common among recreational visitors to the Himalaya. Granted, the lofty bits are distinctive and have good views, and there are fewer pathogens, parasites and allergens in the high alpine. The adversity of hypoxia and cold is a less-complicated sort of adversity than we typically encounter among the masses. And, of course, walking upslope to a well-defined summit can be profoundly  gratifying. Even so, to grasp the cultural and biological diversity that make the Himalaya the most interesting mountain system in the world, it’s important to walk in the hills sometimes.