The Himalaya is a Mountain Range

From the plains of northern India or Nepal, the Himalaya sometimes appear as a white veil to the north. But only during the clearest  weather, perhaps after a heavy rain, is it possible to see how the flanks of the range connect snowy peaks to the rest of the earth. More often, the crest seems to hang suspended above the atmospheric haze, so far from the horizon that it hardly looks like mountains at all.

In map view, the arc of topography that divides Tibet from India is very nearly circular.  Center your compass on a spot near Turpan, in the Tarim Basin of western China, lay the pencil on Arunchal Pradesh, turn it clockwise to Gilgit-Baltistan and, over a distance of 1800 km, the arc you describe will seldom lie more than a few kilometers from the Himalayan crest*.  Defined in this strict sense, the Himalaya extends between the great bends of two rivers that issue from the Tibet Plateau, the Indus to the west and the Yarlung Tsangpo to the east. It includes the highest mountain in the world (but not the second highest), and a majority of all the peaks that exceed 8 km (~26,200 feet) elevation.

The two rivers that enclose the Himalaya share a watershed divide that lies to the north of the crest, near the four-sided, conglomerate pyramid of Mt. Kailas. The Indus and the Yarlung Tsangpo flow in opposite directions, descending gradually at first, then very steeply as they course off the edge of the plateau, each at its own nick-point. The gorges of the Indus cut through drier country, further from the Tropics, and they have been traveled by trans-Eurasian traders since antiquity. In contrast, the gorge where the Yarlung Tsangpo leaves Tibet is an exceptionally wild place, steep and pummeled by a powerful monsoon.  No one has ever traded in the gorges of the Tsangpo, and indeed it was quite late in the British Raj before anyone proved that the river that leaves Tibet is the same one that emerges onto the Indian Plains as the mighty Brahmaputra.

The Himalaya is a region 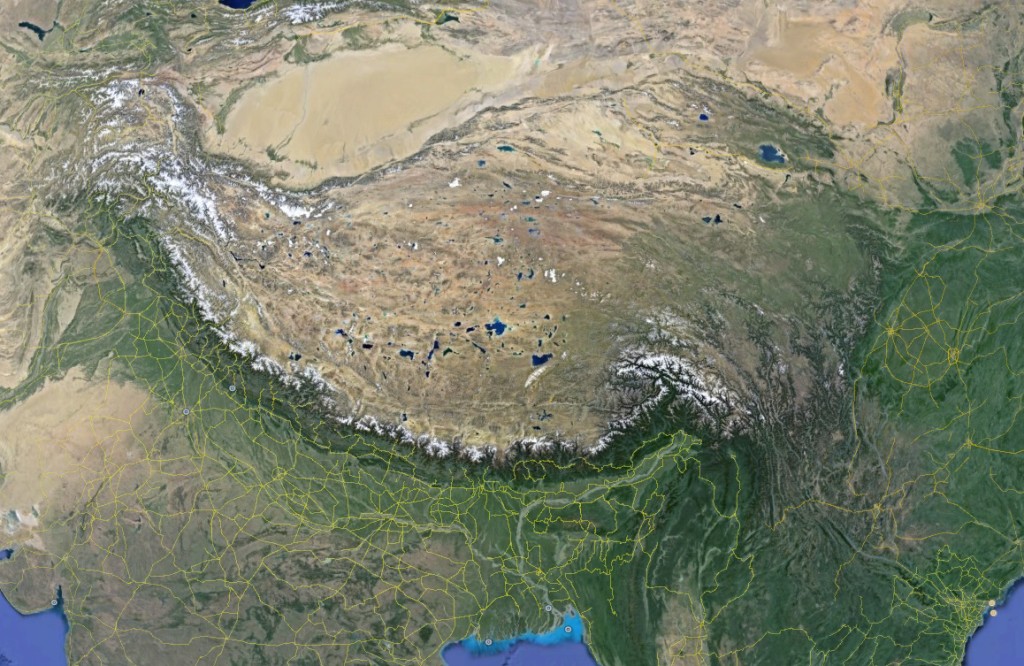 In a broader sense, the Pan-Himalaya is a physiographic package that includes all of the high, rugged terrain that has been shaped by the tectonic collision of India with the rest of Asia, an event that has been ongoing now for 55 million years. Prior to the initial collision, Proto-India approached Asia from the south at about the speed your hair grows. Since the collision, it has slowed to the speed of a growing fingernail, but in in geological time even fingernails grow fast: on average, several hectares  a year of India disappears into the collision zone.

The Pan-Himalayan orogenesis, or mountain building, results from 1200 km of tectonic convergence, the faulting and stacking, metamorphism and exhumation of tens of vertical km of rock, shaped secondarily by millions of years of aggressive, monsoon-driven erosion.  Some parts of the Himalaya are simultaneously growing and eroding very rapidly, so the topography cycles fast, even as the height of the range may remain more or less the same.  We know this because some mineral crystals deposited in a river bed or an offshore marine sediment fan at the bottom of the Himalayan watershed were — in the geological sense — deposited very soon after they cooled within the crust, meaning that the process of uplift and erosion occurred during a geologically brief interval. This aspect of Himalayan geology is well worth revisiting, but for now I just want to make the point that the Himalaya is a dynamic, structure that is cycling rapidly and that many of the massifs visible today are much younger than the structure of which they are a part.

The Tibet Plateau (about the size of the western US) exceeds four, and in some places five kilometers elevation. Its rain-shadowed western interior is a confined drainage, Earth’s highest basin, where streams of melting snow feed vast, shallow lakes. Watercourses confined to the plateau do not export their sediments to the ocean and plains, they carry their burden only as far as the interstices between the ranges.  These, they fill with alluvium, producing a topography of broad, nearly flat inter-montane basins across which distant mountains shimmer in clear air. Eastern Tibet looks different.  Here the plateau has been incised  by great rivers that cut headward as they plunge from the rim of the plateau, carrying their sediments to the ocean, leaving relic patches of flat land amongst the gorge network.

High as it is, the Tibet Plateau is encircled by mountains that are higher still. The Himalaya (strictly defined) rises to the south. Moving clockwise, we meet the jagged, crumbling Karakoram range, which holds the other  8 km peaks, and merges with the knot of the Pamir.  Axillary ranges like the Hindu Kush and the Tian Shan extend from the Pamir region.  The dry Kunlun and Qilian ranges run along the northern margin of the Tibet Plateau, separating it from the great Tarim desert basin to the north, and the broad, north-south cut of the Hengduan Shan marks the eastern edge of Tibet.  The ranges that collectively make up the Hengduan are dissected by the channels of many rivers that drain into the agricultural basins and plains of eastern China. 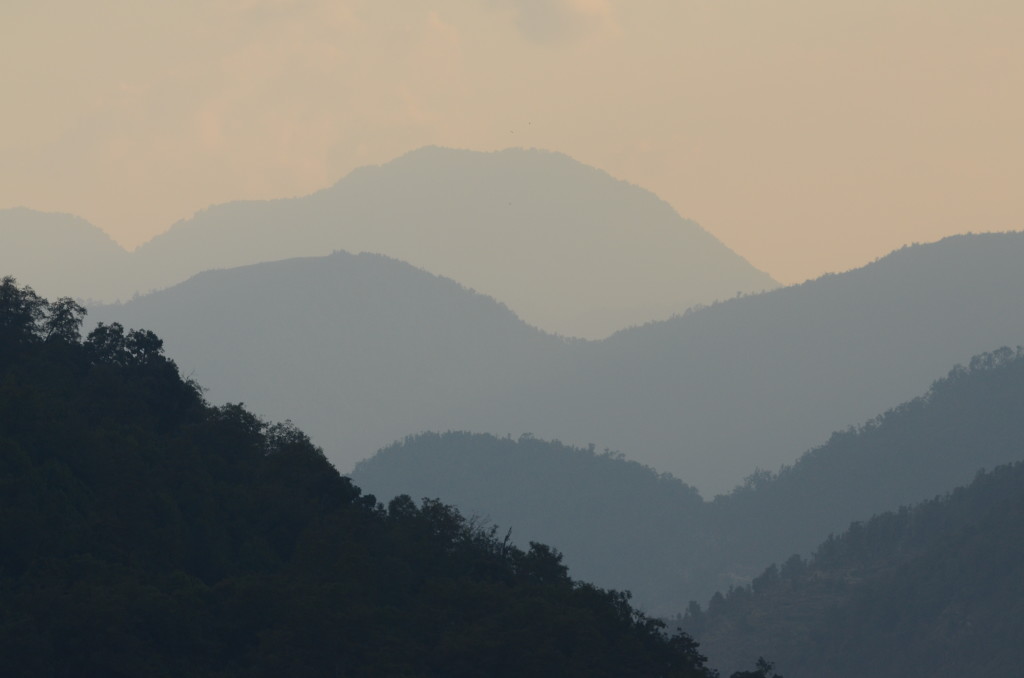 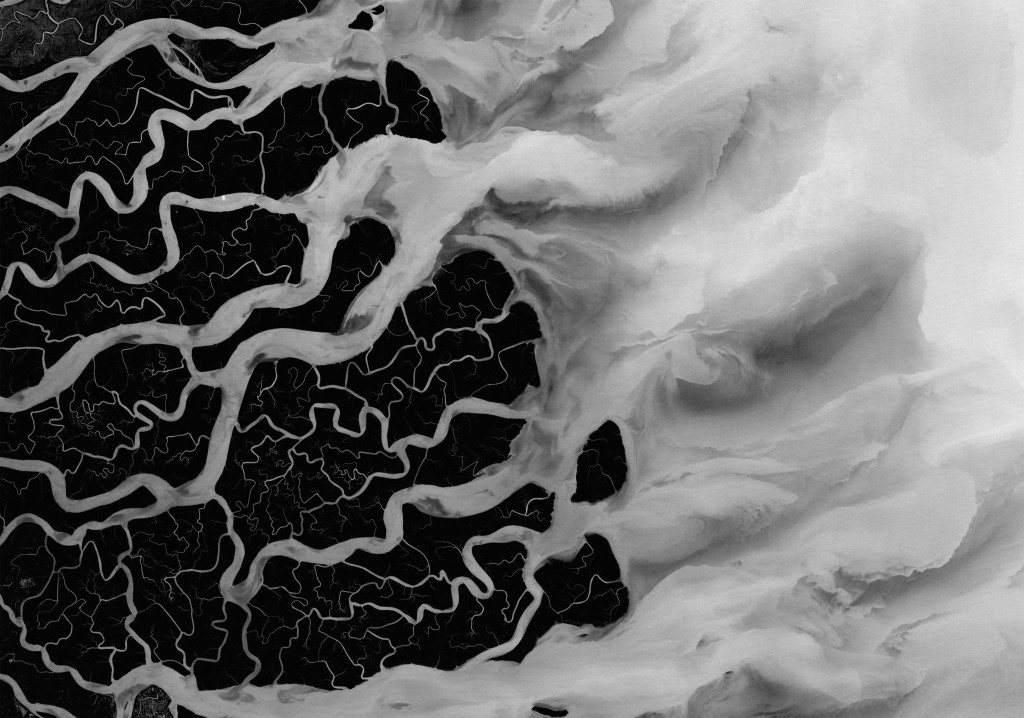 Rapid uplift and rapid, monsoon-driven erosion means that Himalayan rivers carry more sediment relative to their volume than any other rivers on earth.  For example, the Brahmaputra, where it emerges onto the plains of Assam, carries a greater bed load of sediment than any other river in the world except the Amazon, which is much larger.  Thus, Pan-Himalayan rock exists in the sediments that form the Gangetic Plain of northern India and Nepal and the plain of the Indus River further west.  In similar fashion, the Sichuan Basin is filled with material washed down from eastern Tibet, and the Yellow River carries Tibet in powdered form across northern China.

Where Pan-Himalayan sediments make it to the coast, sorted now to a fine silt, they contribute to Earth’s  largest and fastest-growing river deltas. The Ganges and the Brahmaputra flow together at the coast and form the Sundarban, the largest delta of all. Bengal tigers that roam the mangrove forests of the Sundarban are the most man-eaters, and it has been suggested that they get their taste for human flesh from corpses that drift down the river to snag in mangrove. The Mekong Delta, and those of the Indus and the Yangzi, are very large as well. The Mekong Delta is growing so fast at the southern tip of Vietnam that local people claim land by building stilted houses offshore, knowing that in a few years the land will come to them. The Pan-Himalaya has bathymetric as well as topographic features – a thick fan of sediment fills the Bay of Bengal between India and Southeast Asia and extends seaward 3000 km into the southern hemisphere.